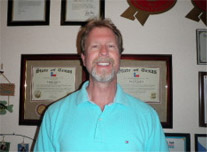 Aquamax Sprinkler Systems Inc. currently employs 20 professionals, so no job is too big or too small. We run background checks on all of our Dallas Irrigation professionals.

Robert Maxvill was born and raised in Dallas, Texas, and currently resides in Collin County.